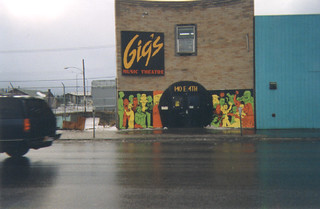 Continuing in my little bout of nostalgia for my days running around at Gig’s, tonight I get to present a set of shots from the club, taken roughly between 1997 and 1998 or so.

There are actually a lot more pictures than just these in the pile that I just discovered, however, I’m holding off on posting them just yet, as they’re a lot of old pictures of my group of friends from back then. Possibly eventually, but for now, this will do.

Some shots of the building, and some shots of a few of the bands that played there from time to time. Most of these shots were given to me by clubgoers at a point when I was working on the Gig’s website.

Anyway, feel free to browse and enjoy — some of you might even be able to join me in my nostalgia! ;)