From The Washington Post: Do ‘elder Goths’ hold the secret to aging successfully?:

(Well…yes. I mean, have you seen me and the people I run around with?)

Since 2014, Bush has chronicled the rituals of her forebears in Maryland’s Goth community. Her contention is that “participation in the Goth subculture presents an alternative to being aged by culture.”

In other words, there is a better, more Goth way to grow old and to prevail over life’s many challenges.

As Bush and her Goth studies colleagues explain it, so-called elder Goths — who came of age with the music decades ago — possess a kind of road map through life that doesn’t exist for fans of more youth-obsessed musical genres.

That, and we bathe in the blood of virgins (consensually donated, of course…this is the 21st century, after all).

“Happy Goth” may seem like an oxymoron — but that’s the point. Bush argues that Goths’ success in aging has a lot to do with their ability to juggle opposing, seemingly paradoxical energies. Take Goths’ emotional intensity: While off-putting to some, Goths’ willingness to harnessdark feelings such as despair, gloom and hopelessness, rather than repress them, can prove healthier in the long run, Bush says. Equally vital is Goths’ ability to find humor, irony and beauty in supposedly “ugly” sources, such as flowers that grow by a cemetery or the absurd frailties of the aging body. In a culture, for instance, that already treats older women as frightful, why not own that, and become the most fabulous grand dame of darkness the world has ever seen?

According to Bush, the subculture’s most important element is a fierce sense of community. Goths feel united by their embrace of difference: As one older Goth puts it, she’s grateful to have a scene “with people who are my age and maybe a little older, who are still living life on their own terms, where they said, ‘I’m older but I still want to go out, I still want to listen to wild and crazy music, I still want to look freaky.’”

I’m 47, well on my way to 48, and very much looking forward to the day when the local club’s doors open up and I can start going out again. While I may not ever go out with the same regularity as I did in my 20s, when I was single and living on Capitol Hill within walking distance of several clubs, I really can’t see myself letting that go until I’m literally physically unable to get out.

This was excellent, and rather remarkably topical for being 50+ years old. Addressing gender and politics personal and national, and though many points are quite dark, with definite hope.

My resolutions for this year:

(That’s my retina iMac, its secondary display, the MacBook Pro I just got from Prairie when we upgraded hers, and my iPad, iPhone, and Apple Watch, respectively. Yes, I make this same stupid joke every year, cause it makes me laugh.)

If you’re reading this, we’ve made it through 2020 and are getting started with 2021. Happy New Year, everyone. It won’t be immediate, but I truly believe that things will improve. I hope I’m right, and that this is true for everyone I know (and most everyone I don’t know, for that matter).

Every year, I set myself a goal of reading at least 52 books over the course of the year — an average of one a week. This year I made it to 54. Here’s a quick (?) overview…

Basically, 2020 took its toll, and all lofty ideas and goals aside, this year was almost entirely dedicated to escapist fluff. Gee, I wonder why that was the case?

Non-fiction: Just one, and it was Star Trek: The Motion Picture: Inside the Art and Visual Effects, so not exactly pushing my boundaries here. Still, it’s an excellent work, and is a perfect companion to Preston Neal Jones’ Return to Tomorrow, which covers the same territory in much more depth but without the visuals.

Non-genre-fiction (where “genre” is shorthand — though, not very short, if you include this parenthetical — for science-fiction, fantasy, and horror): Three this year, the best of which was Fredrik Backman’s My Grandmother Asked Me to Tell You She’s Sorry, which was recommended to me by my wife and which I can easily recommend to you.

Quality genre fiction: While I had high hopes for this category after starting my Hugo reading project and getting through twenty-two books in 2019, this did not end up being anywhere near the majority of my reading.

It started well, with a strong slate of Philip K. Dick Award nominees. Both the winner, Sarah Pinsker’s Sooner or Later Everything Falls Into the Sea, and the Special Citation Award, Sarah Tolmie’s The Little Animals, were excellent, and there weren’t any this year that I didn’t like.

Continuing the Hugo reading project also started well, with Frank Herbert’s Dune (which mostly holds up, though the obvious queer coding of Baron Harkonnen and Piter de Vries to indicate villainy or imply untrustworthiness is something that really stood out on this read), and proceeded apace for a while — but then, well, 2020 happened. Plague! Lockdown! Isolation! And while on one level, being stuck at home with little to do sounds like a great way to get a lot of reading done, for me, at least, the attendant ever-present stresses of living the pandemic life meant that concentrating on serious fiction was difficult to do. I kept trying for a while, but then hit John Brunner’s Stand on Zanzibar — a bleak dystopian vision of overpopulation, government control of the masses, eugenics, colonialism, and protests by an oppressed populace, all wrapped in a very cynical extrapolation of late-60s sexism and racism pervading society in ways that are very different from what we experience now but simultaneously depressingly prescient in how they are still such strong influences. With all that, it took me nearly three full months to slog through (from June 7 to September 30), and I had to take several “fluff breaks” during that time. It wasn’t a bad book, but it was really tough to read something that bleak during this year, and I can’t say that I enjoyed it.

Fluff genre fiction: Unsurprisingly, this ended up being the strong majority of this year’s reading. Almost entirely Star Trek novels, with a few detours into movie adaptations. And given everything that was going on in 2020, it was very nice to have a bookshelf full of options that wouldn’t take a whole lot of brain power for me to disappear into.

Finally, some stats on my year’s reading, according to Goodreads:

A little journalism and a lot of alcohol in late ‘50s Puerto Rico. You can definitely see the seeds of the later Fear and Loathing in this.

Good morning and merry Christmas, all, however you celebrate (or tolerate) the day! I hope it’s a good and safe day for you and all those you care about. 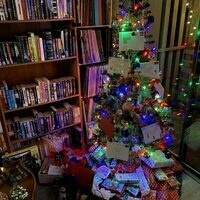 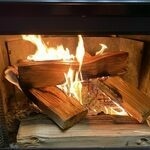 For a while I wasn’t sure I’d make it—concentrating on reading has been difficult this year—but with nine days to spare, I’ve completed my Goodreads challenge of 52 books this year. Sure, it’s lots of Star Trek, and I neglected my Hugo Best Novel project, but I hit my goal. 📚

A fun YA fantasy monster fighting adventure based on Navajo mythology. Part of Rick Riordan’s project to use his clout to to highlight marginalized voices and cultures, which I very much respect.