My brother Kevin is in town for the weekend to hang out with a couple old friend of his, and I was able to get together with the three of them last night for dinner at the Ipanema Brazilian Grill downtown.

Much fun was had — I haven’t seen Kev in a few months, the last time I saw Steve was for the three-family anniversary get together in August of ’02, and I’m honestly not sure when I saw Rob last. We all got to catch up, and much hilarity ensued.

The Ipanema Brazilian Grill is an interesting place. It’s down in the Harbor Steps building across from the Seattle Art Museum downtown, so I was able to just wander down there. We’d agreed to meet there around 7, and since I ended up being the first one there, I got us on the waiting list and grabbed a seat at the bar. The boys showed up shortly afterwards and joined me, and we waited for our table.

When I’d put my name on the list, I’d been told that it would be about an hour’s wait. When it got to be fairly well after an hour without any sign of movement, Rob went over to talk to the hostesses to see what the situation might be. He came back a little annoyed — apparently, when he asked what the best strategy for getting a table in a timely manner was, he was told to “show up at 5:01,” right after they open, “and you’ll get seated.” The bartender then told us that chances of getting a table on a walk-in basis on a Saturday night were slim…but he’d see if he could help us out.

We debated whether to wait for a bit longer or just bail (with quite a few jokes about the reason for our being shunned being “the hippie in overalls” [my brother] and “the guy in the skirt” [me, kilted as usual]), but right about when we’d almost decided to head out, the bartender came back and let us know that we’d be seated in just a few minutes. Sure enough, not long after that one of the hostesses came over to get our attention — and the bartender got a big tip from us.

The next shock for me — living, as I do, on a starving college student budget (only without the college classes to show for it) — came when I took a look at the menu. A single, flat, per-plate fee of $34.95. My jaw dropped, as that’s about three meals at my usual quality of dining out, or a few bags of groceries from the grocery store (admittedly, this may say more about my usual dining habits than about the restaurant itself). Still, we were there, and after some friendly invectives hurled Rob’s way, we settled in for the meal.

The last nasty surprise didn’t affect me all that much, but amused Steve. When we got to the table, he ordered a beer from the tap — the only type of beer that they had on tap. Moments later the waitress came back and let him know that the tap was broken. Okay, so he asked what they had in bottles.

Okay, I don’t drink beer, and that was enough to raise my eyebrows. Maybe it’s just that my friends often tend to be as much beer snobs as they are coffee snobs, but Seattle’s often appeared to me to be as much of a beer town as a coffee town, and seeing a higher class restaurant limit their beer selections to various flavors of watered down American piss water — though, admittedly, balancing that out with Guinness — was a definite surprise. Needless to say, Steve went with the Guinness.

However, with those caveats out of the way, once we got into the meal itself, it was incredible, and definitely worth that initially jaw-dropping price (it’s just not going to be a place I make a habit of hitting a couple times a week…). Rob, the only one of us to have been here before, had told us that this was a “meat-o-rama” — that it was time to “get our meat on”, to “put your meat where your mouth is”, and he wasn’t kidding! 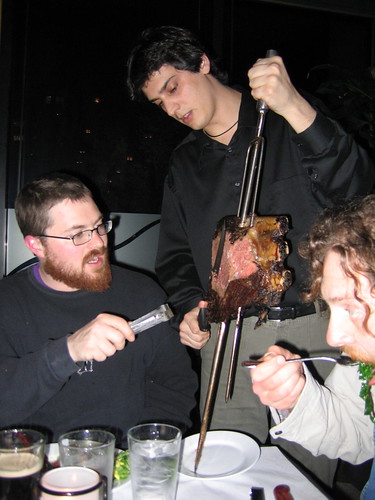 The dinner itself is an all-you-can-eat Brazilian style buffet. You grab a plate and hit the salad bar to grab anything you might want to supplement the main course with, and then sit back down. Each table is given a coaster that’s red on one side and green on the other. Put the red side up, and you’re left alone to eat and talk.

Put the green side up, though, and you’ll soon start to be visited by the servers. The servers circulate throughout the dining area, each one with a skewer that has one of fifteen different types of meat on it, fresh from the grill. They’ll stop by the table, let you know what they’re carrying, and if it sounds good, they carve a slab off right there. You catch it with the small tongs they give you, put it on your plate, and dig in.

It definitely makes for a very interesting and varied dining experience. The meat was incredibly good, too — perfectly cooked, melt in your mouth tender, and oh-so-tasty. I must admit that by the end of the night, that per-plate set price didn’t seem anywhere near as extreme as it did when I first sat down. We’d flip the coaster to green, get a few samples of the different choices, flip it to red to work our way through what we had and let it settle, and then flip it back to green and start the process over again.

Eventually, we got to the point where we couldn’t pack any more in, and just sat back to talk, joke around, and let things settle before we pried ourselves out of our seats and waddled out the front door. A few more minutes of chatting outside, and then Kev, Rob and Steve hopped in a cab to get back to Rob’s house, and I headed up the hill to work off some of what I’d eaten up at the Vogue.

Had a good few hours of bouncing around and chatting with people (finally, after almost four years, I’m starting to meet a few more of the people I see there week after week), and then back home to fall over and pass out.

Good friends, family, food, and music all in one night. Not bad at all.