…no far away galaxy, though. Last night I got an e-mail from Kathleen, who’d stumbled across my Gigs photoset while looking for an old friend of hers. She was kind enough to send me an old photo from Gigs and said I could go ahead and post it along with the rest of my pictures from the club.

The picture was a fairly low-quality scan (a 216k 318×226 .bmp), but I’ve done what little I could to clean it up in Photoshop, enlarging it 200%, tweaking the levels, and running an unsharp mask filter on it. It’s still not pristine, but I’m still thrilled to have this drop in my lap.

Update: Kathleen was able to find the original photo and re-scan it at a higher resolution, so it’s much easier to see now. Turns out I was at a point where I was going through an ill-conceived attempt to actually grow out my beard…. 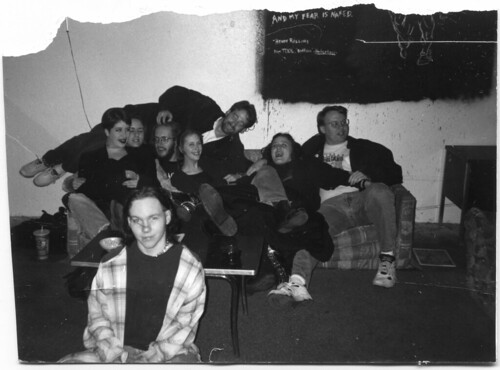 I’m guessing this was taken sometime in 1997 or so. That’s Ray (DJ Happyjack) sitting in front. From left to right on the couch, we’ve got Lydia, Kathleen, me, Kate, and Rebecca (who was going by Apple at the time). Casey‘s lying across the back of the couch. I’ve got no clue who the guy on the far right is.