Update: Welcome, Utilikilt Newsletter readers! Seeing myself mentioned in the newsletter was a very pleasant surprise — good to (virtually) meet all of you! For more UK goodness, drop by the Flickr Utilikilts Group, going strong since 2004. :) 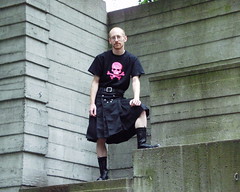 I got this via e-mail last night, and figured it was worth answering publicy as well as via e-mail.

I have a question about the utilikilt you wear. I’m sure you covered it somewhere on you blog but I wanted to know what’s the draw of the kilt? What I mean is, why is a utilikilt better than wearing shorts or pants? Do you take a lot of crap from strangers when you’re out in public?

I’ve been meaning to write you for a while now on one subject or another from your blog but this is my burning quesiton!!

When I first started seeing them after moving down here to Seattle, I just thought that they looked really cool and comfortable, but wasn’t sure if I’d ever actually be brave enough to wear one. I kept seeing them around, though, and every time they’d catch my eye. Eventually I got the name of the company and started poking around their website, looking at the different models available, checking prices, and turning it over in my head.

Eventually my birthday rolled around, and I finally decided that I’d go ahead and get one as a birthday present to myself. As I’ve gotten older I’ve gotten less concerned about “what people may think,” so while I still didn’t know how often I might wear it, I figured I’d probably pull it out of the closet often enough to make it worthwhile. I went down to the UK store and bought my first kilt (which was a pretty entertaining experience in itself), and wore it around that day before and after work — and got my first compliments on it that day, one from a couple guys walking into IHOP, and a jaunty wave and smile from a pretty blonde girl driving down the road.

Really, there’s a few “why’s” to wearing the kilt:

Wearing the kilt — especially if worn “traditionally” (that is, without underwear) — is much nicer. Nothing’s bunched up, constricted, or any of the other annoying little tendencies that men have to deal with. Quite nice.

Also, people realize that that level of confidence and comfort in oneself has to be there. How much of it is me projecting more confidence in myself and how much is the simple assumption that a guy in a kilt has to be pretty solid I’m not sure, but there’s definitely been a change for the better since I’ve been wearing it. I’m often a very shy guy, but…well, it’s kind of like getting dressed up to go out to a fancy function. If you look good, and if you know you look good, you get that extra little boost of confidence that allows you to relate to people in a more outgoing manner than you might otherwise. I get that little boost every day I wear my kilt.

Disclaimer: This may be the kilt-wearer’s version of an urban legend, and I’m no doctor, so I can’t make any definite claims as to how accurate that is. Still, it makes a lot of sense, so I don’t mind using it as one of my reasons — though, admittedly, not a terribly important one for me, as I have no plans to produce any progeny in the foreseeable future. Just in case, though, better to be safe than sorry, right?

And, without delving too deeply into my personal life (my dear ol’ mum and dad do read this site, after all)…there are definite instances where the “easy access” aspect is quite fun. Gropes are a good thing, after all!

As for whether I get harassed by people when I’m wearing it — hardly at all, actually. There have been occasional instances, but looking back over the past year and a half or so, I can only come up with a few.

That’s about it, though — and those instances are far, far outnumbered by the number of compliments I’ve gotten and conversations I’ve gotten into with people curious about the kilts. Of the encounters I’ve had, it’s easily somewhere in the general vicinity of a 95% approval (or at least acceptance) rate.

So, that’s it — that’s the “draw” of the Utilikilt. Hopefully I haven’t rambled on too terribly long, but it just wasn’t a simple two-paragraph answer. In the end, at this point, if it weren’t for the uniform required by my job, I probably wouldn’t bother with pants at all.

To finish off, here’s the “official” Utilikilts Top 10 List:

31 thoughts on “So what’s the deal with the kilt, anyway?”