I think that most people who follow me will already know this from Facebook, Twitter, or Google+, but just in case there’s someone out there still paying attention to this site but not any of my social media outlets…

…just over one week ago, on June 19th, eleven years after our first date, Prairie and I got married in a small civil ceremony at the Kittitas County Courthouse here in Ellensburg.

We very intentionally kept it quiet. We didn’t want a big to-do made of the event for a few reasons, chief among those being that we’d already been dating for eleven years, living together for eight, and even bought a house together two years ago. Our relationship isn’t new, and this seemed to us to be a combination of something very trivial (a few words from a judge, a few signatures on a piece of paper, and we’re done) and something weirdly big (c’mon…it’s getting married!). Most importantly, we wanted to do this for us and how we were most comfortable, and part of that meant keeping it as low-key and low-stress as possible. We each told our immediate family the month before so that they wouldn’t be caught completely off guard when the news eventually came out, and other than the friends we asked to be our legal witnesses, that was it.

We’d actually originally considered not making any announcement at all, but we eventually decided to have a little fun with it. So, once the ceremony was done and we’d had a short “thank you” gathering at our house with our witnesses, we made the “announcement” by switching our Facebook statuses from “in a relationship” to “married” and waited to see what would happen next.

Of course, what happened was a lot of surprised and happy well-wishes, and we had a lot of fun watching the “likes” and comments come in over the course of the evening.

Thanks to all of you who know already for your kind comments, to our families for understanding (or at least accepting) how we decided to do this, to Cody (and Jackee) and Courtney (and Andy) for being our witnesses, and to Judge Fran Chmelewski for making it official.

Thanks also to Jackee for taking photos, since I couldn’t very well do both at the same time. Here they are: 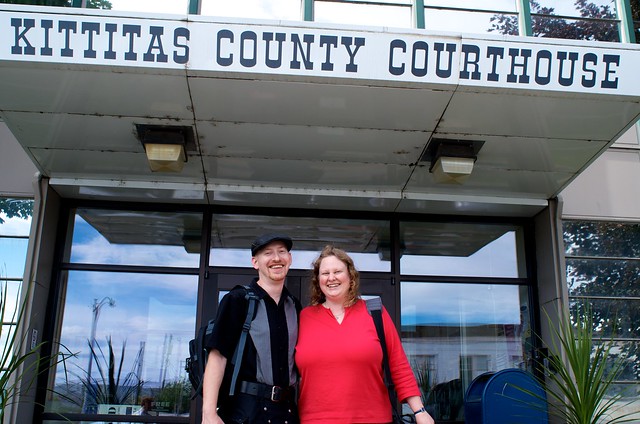