Buried in the midst of my Pride photos: my 12,000th photo uploaded to Flickr. Yeesh!

Another 8,000-some shots and I’ll have as many pictures on Flickr as I have tracks in iTunes. No, mine aren’t ready yet (really, I’m about to get started on them, I promise), but here’s a nice group shot of the group in the truck by generalchaos.

Pride yesterday was a lot of fun. Every other year I’ve gone, I’ve shot from the sidelines, doing my best to get an overview of the entire parade and all the different groups. This year, I decided to try something different. A few weeks ago at the Mercury, dizzy88 recognized me from my Flickr account and suggested I ride along with the Goth Pride float and shoot for them this year. It sounded like a good plan to me, and definitely a different vantage point than I’d had before, so I decided to take that approach.

Prairie needed a day of rest, so she stayed home while I grabbed a bus downtown in the morning. Since the Goth Pride float was towards the end of the parade, I spent some time wandering up and down the staging area, grabbing shots of the various groups as they got ready to go. Once people near our group started moving, I hopped on board the truck, and rode the parade route from there, shooting the crowds to either side of the truck as we made our way along. Much fun, especially as the brakes on the truck were “either on or off,” so any acceleration or deceleration had a tendency to throw us all stumbling from one end of the truck bed to the other. No injuries, but a lot of laughs!

I’m a bit behind in my picture processing right now (I haven’t even gone through what I shot on Memorial Day yet), but I’m hoping to get to my shots later on this week sometime. In the meantime, midnytetragedy has posted her shots, and I’m sure other people will be posting theirs before too long.

I’ve finished uploading older photographs into my Flickr account for now. I’ve been concentrating on bigger “event” things to put into sets, rather than everyday stuff.

And right at the end of the Pride Day ’01 set, just for Kirsten: 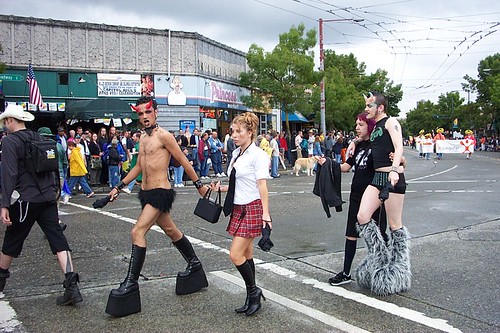